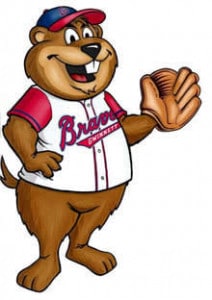 Beau reported that he did not see his shadow, foretelling an early spring at The Yellow River Game Ranch.

Beau shared the sunrise with hundreds of bleary-eyed, faithful supporters as he sought his shadow. Had Beau spied his ample shadow, citizens far and wide could have anticipated at least six more weeks of woe-be-gone winter. Since Beau did not see his shadow, onlookers were encouraged to prepare for Spring-like temperatures within the next six weeks.

This year, Beau was joined by his much more athletic cousin, “Chopper,” who was recently chosen to be the Gwinnett Braves’ mascot. The Atlanta Braves AAA team moved from Richmond, Virginia to Gwinnett County, Georgia to begin the 2009 season.

For a schedule, tickets and player info, visit www.GwinnettBraves.com.

Beau has been recognized for his public service to Americans by four Georgia Governors; and has twice been commended for the accuracy of his predictions by The National Weather Service. He has received honorary doctorates from The University of Georgia – “DWP, Doctor of Weather Prognostication” and Georgia State University – “Doctor of Southern Groundology.” He has also earned the very special designation of “Cumulous Barometrist Groundhogolist”– a highly-coveted title among his meteorological peers.

Beau appeared on “The Today Show” with Willard Scott during The Democratic Convention in 1988. He answers his own mail (no form letters) with a complimentary V.I.G. (Very Important Groundhog) Photo on a year-round basis. In 2004, Beau was featured on Animal Planet on Feb. 2nd.

Every year, General Beau Lee, Ph.D. awakens to the ringing of the antique bell outside his “Weathering Heights” mansion, where he lives in touch with the elements year ’round– unlike his pampered counterpart in Pennsylvania who lives in a climate-controlled environment in the town library where he is fed dog food and ice cream. That’s why Beau can claim a 94% accuracy rating while the pampered impostor can only manage 85%.

About the Game Ranch

The Yellow River Game Ranch, Georgia’s oldest animal preserve, is now celebrating its 45th year of providing children and adults a ‘nose to nose’ experience with wildlife. The preserve has over six hundred animals and birds. The Game Ranch is open seven days a week except for certain holidays, 9:30 am to 6:00 pm, with the last ticket sold at 5 pm.