7:34 am, 56 degrees: Enticed by the smell of Waffle House “scattered, smothered and covered” hash browns just outside his mansion door. General Beauregard Lee awoke to a balmy 56 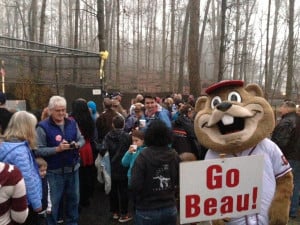 degree morning as a heavy fog lay across the Game Ranch. He did not see his shadow, foretelling an early spring for the Sunny South.

The Yellow River Game Ranch is in its 54th year of providing ‘nose to nose’ interaction with Georgia wildlife.

What do you think about Beau’s prediction?