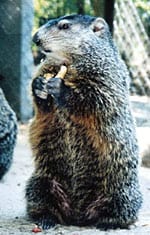 proclamation naming Beau “Gwinnett’s Official Weather Prognosticator.” The proclamation recognizes Beau’s 96% accuracy rating over the past 24 years, as well as the fact that he has been honored in similar fashion by five successive Georgia governors.

Commissioner Beaudreau will present the document to Beau directly during the Groundhog Day festivities on the morning of February 2. Following is the text of the County Commission proclamation:

WHEREAS: Each year on February 2nd, Gwinnett’s celebrated Official Weather Prognosticator, General Beau Lee, makes his highly anticipated emergence from his Weathering Heights mansion at the Yellow River Game Ranch to predict the weather for the next six weeks; and

WHEREAS: Beau’s predictions have been accurate for 23 of the past 24 years and, overall, he has a 96% accuracy rating, a remarkable and prodigious feat unequaled by man or animal; and this year marks the 25th anniversary of the National Groundhog Day celebration; and

WHEREAS: Beau, as a true American, a well-grounded Georgian and noteworthy Gwinnett resident, has repeatedly demonstrated his extraordinary knowledge of atmospheric conditions and seasonal changes and provided comfort and assistance to all Gwinnettians with his annual weather prediction; and

WHEREAS: Beau brings international attention and acclaim to Gwinnett County on an annual basis, having already been proclaimed Georgia’s Official Weather Prognosticator by five successive Governors; and

WHEREAS: In recognition of Beau’s remarkable contributions to meteorological knowledge, the county of Gwinnett wishes to commend highly our favorite furry forecaster; now

THEREFORE: We, the Gwinnett County Board of Commissioners, do hereby proclaim and recognize Beau as “Gwinnett’s Official Weather Prognosticator” and do further pay special honor and tribute to him for his precise annual prediction that enables the people of Gwinnett to prepare effectively for the upcoming season.